Here are my links and thought for September. I spent the last few weeks writing a ~200 page patent at work (and some nights and weekends), so I wasn’t as diligent as I would have liked collecting articles, but I still have a pretty nice selection. As always, feel free to send along anything that you feel should be included in my monthly summary!

The Mass Brew Brothers have teamed up with the Massachusetts Brewers Guild to launch a new Massachusetts Beer Trail App. I downloaded the app and it looks beautiful, is very user friendly, and has a ton of info. Unfortunately the first brewery I visited post-download I forgot to check in, it will take some time to make that a habit.

The biggest local beer story has been the legal battle between breweries and distributors about Massachusetts franchise laws. One of the best summaries I’ve seen was written by a law group, who can clearly explain the issue much better than I can. Needless to say, I side heavily with the breweries on this issue. It is crazy that a brewery can’t end a relationship with a distributor that is doing a poor job or doing unethical things.

Until this resolves (and even afterwards) I imagine many local breweries will sign on with some of the craft-centric distributors that have popped up in the state. Devil’s Purse brewery has signed on with Night Shift distributors, we should see their beers statewide soon.

AB-InBev has stated that they are no longer focusing on acquisitions, they are going to grow the brands they have already acquired. This isn’t surprising, they can only buy so many breweries before they are just competing with themselves for the same subset of customers. 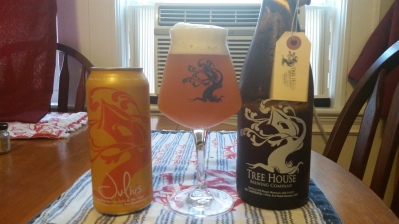 Norm Miller has an article on TreeHouse’s expansion and their continued work to try and meet the crazy demand for their beers. I haven’t been out to TreeHouse in a while, the long drive and long lines for a limited number of cans (and no guarantees there will be any left) has deterred me. I’ve heard the new brewery makes the lines move quickly and there is usually a good amount of beer available, so I might have to make the trip again soon.

Zack from Raising the Barstool recounts his experience at Trillium’s Zwanze Day celebration. I don’t get to many beer events these days, family comes first, but this event is at the top of my short list.

Hop Culture has a profile on Earth Eagle Brewing, the New Hampshire brewery that specializes in gruit, an ancient style that uses herbs and spices instead of hops.

Lord Hobo is continuing to expand at a rapid pace and introduce their product in more markets. This is an interesting strategy, when many regional breweries are feeling the squeeze between the big beer acquisitions and hyper local small breweries. Lord Hobo also seems to be focusing on a few core beers when many other breweries are constantly rotating to meet the demand for novelty. It will be interesting to see how this turns out for them.

Eater Boston has an article on Exhibit A Brewing Company, a brewery that has quickly built a strong reputation amongst local drinkers.

The new owners of Geary’s are trying to balance the brand’s classic beers with a number of new releases. I think this is a really good idea, I am a fan of a number of the classics but the brand needs some excitement and novelty moving forward.

Boston.com polled some local beer experts on their favorite local fall beers. Tons of good choices here (and a few that I need to try myself).

Food and Wine has a list of the best American Octoberfest beers which includes a couple of local favorites.

The Bangor Daily News details a Maine business that acquires used wine and spirit barrels to re-sell to breweries for barrel aged beers.

Paste Magazine wrote a brief drinker’s guide to Boston. This is a nice starting point if you’ve never been to the city, but it could have easily been expanded.

Two new breweries opened in Amesbury this month, BareWolf and Brewery Silvaticus. I wonder if they planned their openings to coincide, otherwise that is a pretty crazy coincidence.

I have no idea if this means anything or what methodology was used, but Hoppy Boston was named to ShoutAbout’s top 70 beer blogs. Regardless of how you feel about this type of listicle, it was pretty cool to be on the list with a number of blogs that I read regularly and enjoy.