There are so many breweries in New England (let alone the rest of the country) that I have a really hard time keeping track of all of them. It’s especially difficult with breweries that don’t distribute to Massachusetts bottle shops, there are a number breweries in every state that I haven’t been able to try due to brewery location and lack of distribution. Occasionally I stop by one of my local shops for a stock up run and see new-to-me beers by a local/regional brewery that I’ve never tried, and I usually jump at the opportunity. A good example is Mason’s Brewing Company out of Brewer, Maine. I can’t remember the last time I was in Brewer, so I’ve never been to their brewpub, but I grabbed a few cans after a recommendation from an employee at Craft Beer Cellar in Framingham. The beers were Hipster Apocalypse, an IPA brewed with Idaho 7 hops, and Liquid Rapture, a DIPA with Ella, Idaho 7 and Citra hops. Both beers are available in 16 oz. tallboy cans. 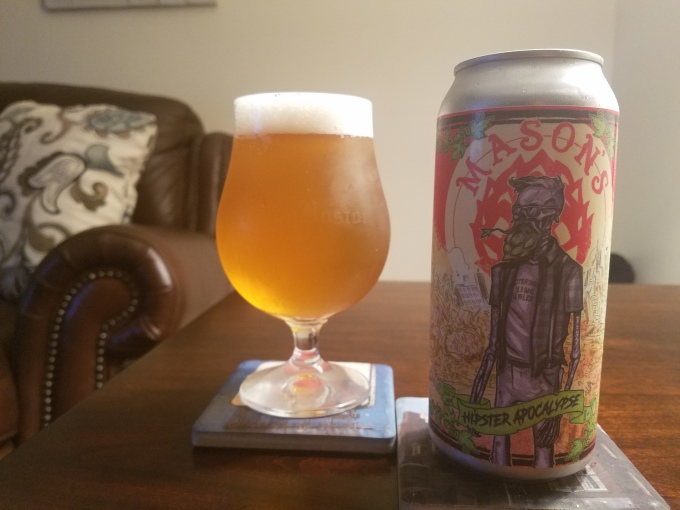 Mason’s Hipster Apocalypse pours a slightly hazy light orange with a solid white head. The scent features some fruity hops, citrus and tropical fruit. The flavor is very hop forward, notes of honeydew, guava and grapefruit along with a soft bitterness, this is clearly a New England style IPA. A mild malt backbone rounds out the flavor with hints of cereal and honey. Hipster Apocalypse is medium bodied, super drinkable, and not too boozy at 5.7% ABV. The finish is slightly sweet with some lingering fruity hops. I enjoyed Hipster Apocalypse, it’s a flavorful and well crafted juicy IPA. Hoppy Boston score: 4.25/5.

Mason’s  Liquid Rapture pours a hazy straw yellow with a solid white head. The aroma is a big hit of fruity new world hops. This carries over into the flavor, notes of grapefruit, tangerine, guava and lemon. There is a touch of bitterness here, not bracing  but it doesn’t taste like you’re drinking straight fruit juice either. This is balanced by a noticeable malt backbone, hints of honey, bread crust and just a whiff of booze. Liquid Rapture is medium bodied and drinks very easy for 8.2% ABV. The finish is crisp with some lingering hop flavor. Liquid Rapture is a very good DIPA, all of the hop flavor you want with a little bite and malt for balance. Hoppy Boston score: 4.5/5.