For a long time I avoided most types of wheat beer. I’ve never been a fan of hefeweizens and only like a few Belgian style witbiers. My experience with American wheat beers was mostly with Sam Adams Summer Ale and similar wheats. I am not a Sam Adams basher, I love a number of their beers, but I detest the Summer Ale, I would honestly rather drink Bud Light. This led me to avoid wheat beers almost entirely. I started to change my attitude on wheat beers when many local breweries (especially Trillium) started featuring NE IPAs brewed with a substantial amount of wheat in their grain bill. The wheat malt helps enhance the flavors of the hops, so the natural follow up to these IPAs were American wheat ales that incorporate large doses of New World hops. A great example of this is Demo Tape Eleven from Exhibit A Brewing Company, the latest release in their series of test-batch Demo Tape beers. The first batch of Demo Tape Eleven sold out extremely quickly and I didn’t get a chance to try it. Fortunately they made Side B, a second batch that was double dry-hopped. Exhibit A Demo Tape Eleven Side B is available for a limited time on draft and in 16 oz tallboy cans, unless people really like it and they make it into another regular release beer. So if you try it and like it make sure you let them know! 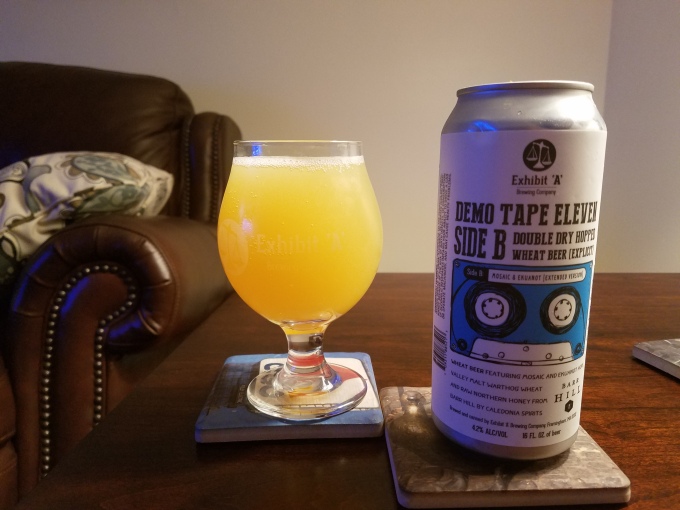 Exhibit A Demo Tape Eleven Side B pours murky light orange with a small white head. The aroma is a nice burst of hops, citrus and tropical fruit. The flavor is also very hop forward, notes of guava, tangerine, lemon and mango along with minimal bitterness. This is balanced by a mild malt backbone, hints of crackers and wheat bread. Demo Tape Eleven Side B is super light, easy to drink and sessionable at 4.2% ABV. The finish is crisp with some lingering hop flavor. This beer is delicious, tons of hop flavor and aroma but not the one-note forgettable beer that so many hop-forward session beers turn into. I really hope this becomes one of Exhibit A’s regular releases. Hoppy Boston score: 4.5/5.

Exhibit A Danko, Exhibit A The Cat’s Meow and Demo Tape 5