There are a number of major milestones that a brewery goes through as it starts up and begins to establish it’s place in the market. Opening the doors and starting to sell beer is obviously the first huge event, along with seeing your beer on draft at local bars. Starting to can or bottle beer is another big step forward, they allow customers to purchase more beer at a time and attract customers who don’t like growlers. The new packaging also allows the brewery to start distribution to local bottle shops, even if they are just transporting a few cases at a time on their own. This is an underrated step in the growth of a brewery, having your beer in a bottle shop will introduce it to a larger range of potential customers. I was excited to see Lamplighter beers available in cans on a recent visit to Craft Beer Cellar in Framingham. I’ve enjoyed a number of Lamplighter beers and while I have no issue visiting the brewery (it’s very close to my office), I hope the distribution helps introduce their beers to more local drinkers. One of the beers I picked up was Watchman, a wheat IPA brewed with Hallertau Blanc and Hull Melon hops. It is available on a rotating basis on draft and in 16 oz. cans. 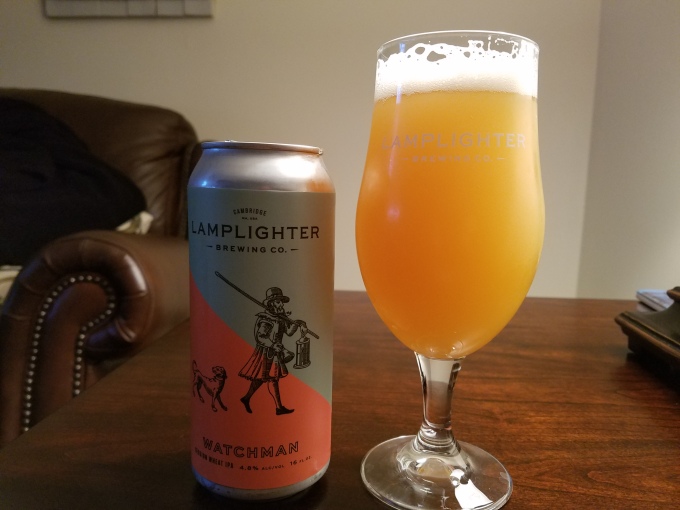 Lamplighter Watchman pours murky dark yellow with a solid white head. The aroma is a big hit of fruity hops. The flavor is also hop forward, notes of cantaloupe, white grape and lime but minimal bitterness. this is balanced by a mild malt backbone, hints of wheat bread and crackers. Watchman has a light body, smooth drinkability and is sessionable at 4.8% ABV. It has a crisp finish with lingering hop flavor. The hops in Watchman caught me off guard at first, they impart a pretty different flavor profile compared to many popular IPAs, but I really enjoyed the beer. Different and definitely worth trying! Hoppy Boston score: 4.5/5.