My wife has to travel locally as part of her job, and we’ve started to do a little research to see if there are any brewery stops that are out of the way normally but on her travel route. This is the place where you can rave about how awesome my wife is, you know it’s love when she goes on a work trip and brings back beer. One of her regular stops is in Amherst, MA and the office she visits is right down the road from The Hangar Pub and Grill which doubles as the home of Amherst Brewing Company. I think the last time I was in Amherst was for a rugby tournament my junior year in college (which was more than a few years ago), so this was my first opportunity to try any of Amherst Brewing Co.’s beers. My wife grabbed a nice selection, and we have sampled most of what they had available at the time. I’ll just review two of the beers here (for now), but I enjoyed a number of the beers I tried. All of Amherst’s beers are available on draft and in 16 oz. tallboy cans to go. 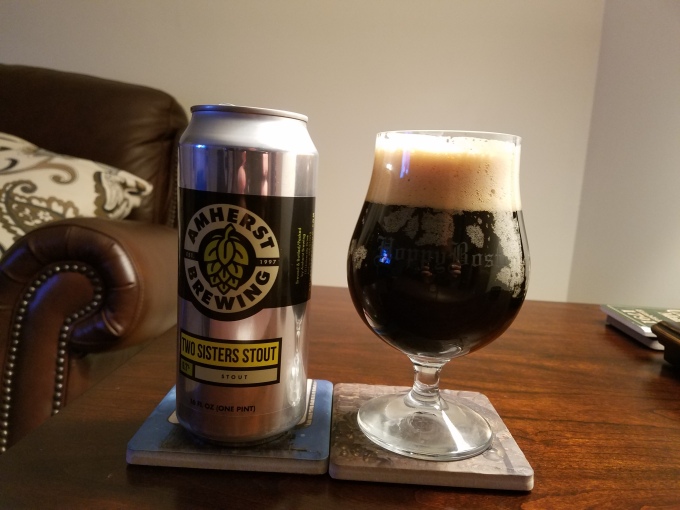 Amherst Two Sisters Stout pours deep brown with a massive tan head. The scent is full of roasted malt aromas. The flavor is also malt forward, notes of milk chocolate, toffee and brown sugar. There is minimal hops, some earthy notes and a hint of late bitterness. Two sisters has a medium-full body, drinks easy and isn’t too boozy at 6.7% ABV. The finish has a touch of sweetness with some lingering roasted malt flavor. I’ve been asking for more non-imperial, non-barrel aged stouts and this is a nice example, plenty of malt flavor and a little sweetness without being cloying. Hoppy Boston score: 4.25/5.

Amherst Jess pours a hazy orange with a small white head. The scent is a huge burst of New World hops, tons of citrus and tropical fruit. The flavor is also very hop forward, notes of grapefruit, guava, honeydew and orange. There is also a little bitter kick, it’s still a New England style IPA but not the zero-bitterness hop juice that many breweries are making. There is enough malt to add a little balance, touches of bread dough and honey. Jess is medium bodied and very easy to drink but packs a little punch at 7.3% ABV. The finish is crisp with some lingering hop flavor that keeps you coming back for more. This is a very good IPA and worth the drive out west to grab! Hoppy Boston score: 4.5/5.