I’ve made it pretty clear in this space that I don’t usually go out of my way to chase “unicorns” or “whalez”, the craft beers that are so hyped up they cause otherwise rational people to wait in line for hours in order to buy a couple cans or bottles. That being said, I do have a running list of beers that I’ve heard good things about and will jump at the chance to try if acquiring them doesn’t require anything too crazy. One beer that’s been on this list for a while is Derivative, a series of American pale ales from Proclamation Ale Company in West Kingston, RI. Each version of Derivative features a particular hop variety. Proclamation has been distributing their beers to the Boston area for a while now, but we get limited amounts and they tend to sell out very quickly, so I’ve been looking to try this beer for a while but always seem to just miss it when it lands in stores. I saw on Instagram that Sudbury Craft Beer got in a shipment of the Galaxy version of Derivative the other week, I showed up the next day and was able to grab the final can left in the store. Proclamation Derivative: Galaxy is available year-round (when you can find it) on draft and in 16 oz. tallboy cans. 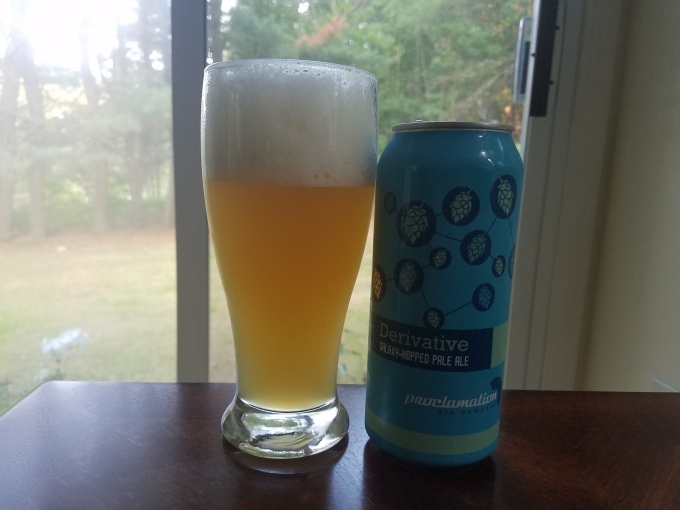 Proclamation Derivative Galaxy pours a hazy light yellow with a massive white head. The scent is a big burst of citrus hops. The flavor is very hop forward, notes of tangerine, grapefruit and mango along with a mild bitterness. This is balanced by some malt flavor, touches of white bread and crackers. Derivative Galaxy is light bodied and very easy to drink and just a touch boozy for an APA at 6.0% ABV. The finish is crisp and clean with a little lingering hop flavor. I was glad that I finally tracked down a can of Proclamation Derivative, and it didn’t disappoint, this is a top notch pale ale. I will still be on the lookout for the other versions, as I tend to prefer Mosaic and Citra hops to Galaxy, but this is still a very good beer. Hoppy Boston score: 4.5/5.