This is a slightly new idea that I am playing around with. Every so often there are interesting tidbits, opinions and ideas that I have regarding beer, brewing, the industry, etc. that don’t necessitate a full post. Every so often I am going to try and compile a few of these thoughts into a “random beer thoughts” post. Some of these  are things I have previously shared/discussed on social media, so if you’ve already seen some of these I apologize (but thanks for reading my tweets). Let me know what you think!

-I have written many a couple articles about my distaste for seasonal creep, and it’s no coincidence that these gripes center around fall beers being released in July. Part of my issue is that I am not a fan of pumpkin beers, so I don’t need to see them on the shelves when it’s 90 degrees out. I also live in the Boston suburbs and have to commute in and out of the city everyday, which is much easier in the summer, so I don’t need any reminders that summer is coming to an end.

-One of the unintended perks of writing a craft beer blog is that anytime I have a get together my friends try to impress me with their beer selections. I had a few friends over for a BBQ at the end of the summer and the coolers (and eventually my beer fridge) ended stocked with beers from Ballast Point, Jack’s Abby, Allagash, Trillium, Notch and Riverwalk. 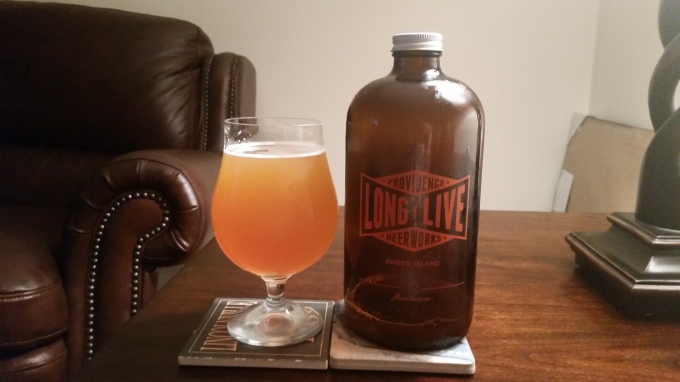 -My friends Tim and Amanda drove up from Providence stocked up with Rhode Island beers that haven’t made it into Massachusetts yet. One of the highlights was definitely a couple growlers from Long Live Beerworks in Providence. Their IPA was very good and the session IPA was exceptional, one of the better SIPAs I’ve tried. Keep an eye on this brewery, I expect big things based on my first tastes.

-Overall I am a big fan of the industry shift towards cans, they are portable, no need to track down a bottle opener, and 16 oz. tallboys are an ideal serving size. The one negative is for homebrewers (like me), who relied on cleaning bottles to save a few bucks at the homebrew store. So many of the beers I buy are in cans now, so I find myself buying cases of empty bottles. I would love to keg my homebrew, but I haven’t gotten the approval from the boss to buy that system, plus it makes it harder to share/do a split batch with a friend.

-I think that all bottles and cans should have packaged-on dates, it’s especially important with hoppy beers but a good habit for brewers. That being said, I am terrible about checking the dates before I buy beer. There have been a few occasions recently where I’ve been disappointed by a beer and then checked the date and realized it’s well past it’s peak. Some of this is on bottle shops that need to keep better inventory, but way more is on me for not checking before I buy.

-As the local beer market gets more crowded between new breweries opening locally and more competition moving in from out of state, consistency and quality control become paramount to a brewery’s success. I’ve recently opened beers that have been completely flat or clearly oxidized. I have also a particular beer on different occasions and had it taste so different that I wondered if the batches were brewed with the same recipe. When I have these negative experiences it drastically lowers the chance that I’ll keep buying beers from the offending brewery. Brewers need to realize that one bad batch can alienate hundreds of potential customers and do everything in their power to maximize quality control.

-That’s all for today, let me know what you think of the new article style and I’ll try to make this a somewhat regular feature!