Every year a multitude of new breweries are opening while others are expanding production and opening new taprooms. There isn’t a single business model that these brewers need to follow, there have been many different routes to success. I’ve enjoyed watching the path taken by Aeronaut Brewing Company in Somerville. First they opened their taproom, a fun space to get together with friends and try some beer that immediately became a popular neighborhood hangout. The taproom featured a rotating selection of beers that allowed the brewers to experiment with recipes and eventually come up with a number of popular flagship and seasonal releases. Now that the brand has been established they started expanding production, and recently they began canning and distributing a few on their beers. The first beer canned was A Year With Dr. Nandu, an IPA brewed to celebrate the completion of Aeronaut’s first year in business. The anniversary batch sold out incredibly quickly, but recent runs have made it out to local bottle shops. Aeronaut A Year With Dr. Nandu is brewed with Centennial and Mosaic hops and is available on draft and in 16 oz. tallboy cans. 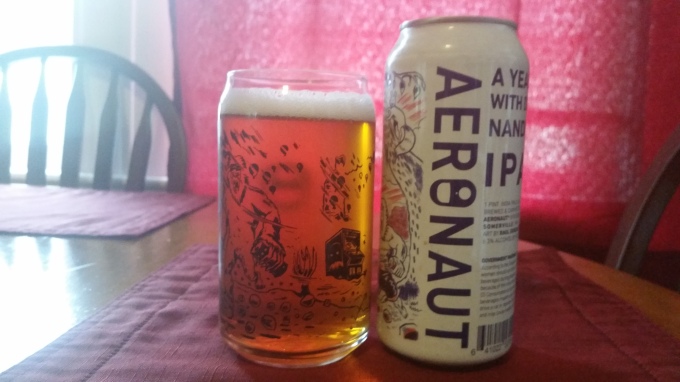 Aeronaut A Year With Dr. Nandu pours a clear copper with a solid white head. The scent is a solid burst of hops, plenty of citrus and tropical fruit. The flavor is also hop forward, notes of grapefruit, mango, orange and pine along with a solid bitter bite. This is balanced out by some malt flavor, hints of grainy bread, honey and toffee. A Year With Dr. Nandu is medium bodied, easy to drink and not too boozy at 6.3% ABV. The finish is crisp and clean with some lingering hop flavor. The stable of high quality IPAs produced in Massachusetts continues to expand and this beer is definitely climbing up that list. I highly recommend grabbing a four pack of A Year With Dr. Nandu, or swinging by the brewery and grabbing a pint! Hoppy Boston score: 4.5/5.

Aeronaut A Session With Dr. Nandu, Aeronaut The Eye of Sauvin