IPA’s are still far and away the most popular non-macro beer style, easily outpacing the sales of their maltier counterparts. This presents a few issues for larger scale breweries with national distribution. The biggest issue is freshness. One of the best parts of an IPA is the burst of hop aroma from a fresh batch, but these aromatics begin to dissipate quickly. It is hard for bigger breweries to stack up against smaller outfits who sell the majority of their beer onsite, guaranteeing ultra-fresh beer. Printing born-on dates helps, but you are still relying on bottle shops to keep track of their inventory and consumers to check before they buy. Firestone Walker adopted a more thorough strategy for their new Luponic Distortion series of IPAs. They brew a completely new batch with a new recipe every 90 days, and each can clearly advises the consumer to check the date and make sure to consume within 90 days of canning. Luponic Distortion also taps into the fact that many IPA lovers crave what’s new and cutting edge. Each beer features experimental hop varieties, most of which have never beer used to brew commercial batches. This series should help Firestone Walker produce exciting and innovative IPAs while maximizing the chance that they will be consumed at the peak of flavor and aroma. Firestone Walker Luponic Distortion #1 is now available on draft and in 12 oz. cans. 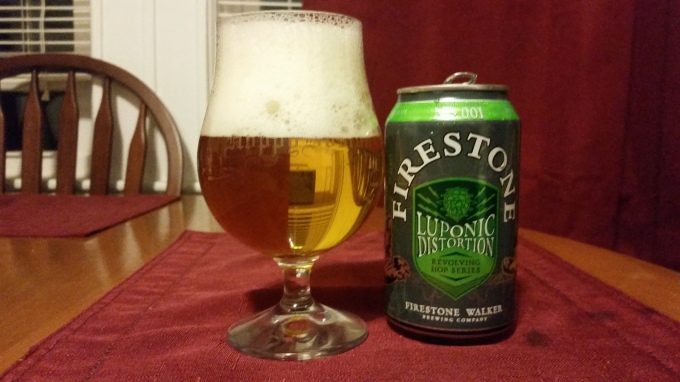 Firestone Walker Luponic Distortion #1 pours a clear golden yellow with a massive white head. The scent is a big burst of hops, mostly citrus and tropical fruit. The flavor is very hop forward, notes of grapefruit, tangerine, mango and fresh herbs along with a soft bitterness. The beer is balanced by a lighter malt backbone, hints of white bread and biscuit. Luponic Distortion #1 is light bodied and very easy to drink, at 5.9% ABV it is on the lower end of the IPA alcohol spectrum. The finish is clean with a touch of lingering hop flavor. I really enjoyed the first entry in the Luponic Distortion series, I can see why this is getting rave reviews. I look forward to trying the new experimental beers that follow! Hoppy Boston score: 4.5/5