I am going to take a quick break from porter month to review something a bit different tonight. Stoneface Brewing Company in Newington, NH is one of the vast number of breweries that have opened in New England in the last few years. It was founded by Peter Beauregard, an avid home-brewer with substantial New Hampshire roots. Stoneface is named in honor of the iconic Old Man in the Mountain, a New Hampshire landmark. I had heard some positive things about Stoneface but I was unfamiliar with their beer until I noticed it’s appearance in Massachusetts bottle shops over the last few months. Stoneface has a series of year-round and rotating beers. The most common I’ve seen locally are their IPA, Pale Ale and India Red Rye Ale. While some beer enthusiasts like to judge a brewery based on their IPA (and I have done this many times in the past), I am trying to familiarize myself with new breweries by trying some of their other releases. With this in mind I grabbed a bottle of the India Red Rye Ale, I am a big fan of carefully crafted rye beers, when you get the right mixture of barley, rye and hop varieties all working together you can make a phenomenal beer. Stoneface India Red Rye Ale is currently available on draft and in 500 mL bottles. 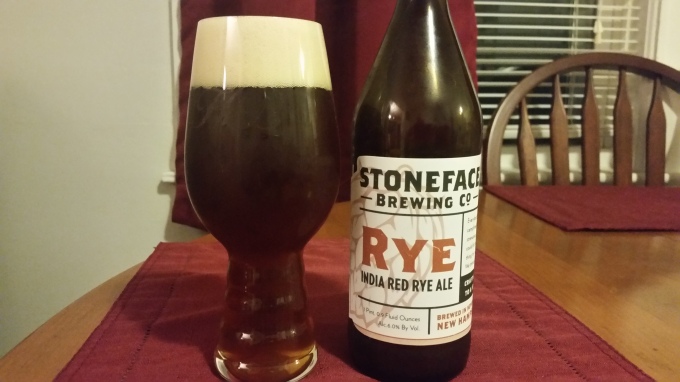 Stoneface India Red Rye Ale pours deep red with a massive off-white head. The scent has a solid burst of fruity hops, the aroma you expect from any beer with the word “India” in the title. The taste is hop forward but not overwhelmingly so, more rye ale than rye IPA. You get some notes of grapefruit, orange, pine and grass along with a crisp bitterness. There is also a full and complex malt profile with spicy rye, fresh bread and a touch of caramel. The beer is medium bodied and easy to drink, middle of the road at 6% ABV. The finish is crisp with some lingering hop bite and spicy rye. I really enjoyed this beer, I love the combination of rye and hops, when it’s done right it makes a complex and delicious product. I look forward to sampling more of Stoneface’s offerings now that they are available in MA! Hoppy Boston score: 4.5/5.