My style of the month reviews should follow the trend I’ve established on Hoppy Boston, I will focus on New England beers and mix in a few national favorites that are available in the Boston area. Some less common styles might necessitate fewer local reviews, but that won’t be much of an issue for a popular style like porter. I’ve tried so hard to keep up to date on the local beer scene (along with the other craziness going on in my life) that I have missed the boat on a number of breweries that have expanded distribution into Massachusetts. One such brewery is Revolution Brewing out of Chicago, who expanded into the Boston market relatively recently. One of Revolution’s year-round beers is Eugene, a robust porter brewed with chocolate and Belgian specialty malts. One of my friends at Craft Beer Cellar in Newton recommended the beer when I was looking for new porters to try, and I thought it would be a good introduction to Revolution. Eugene is named after Eugene V. Debs, an American union leader and activist. It is available year round on draft and in 12 oz. cans. 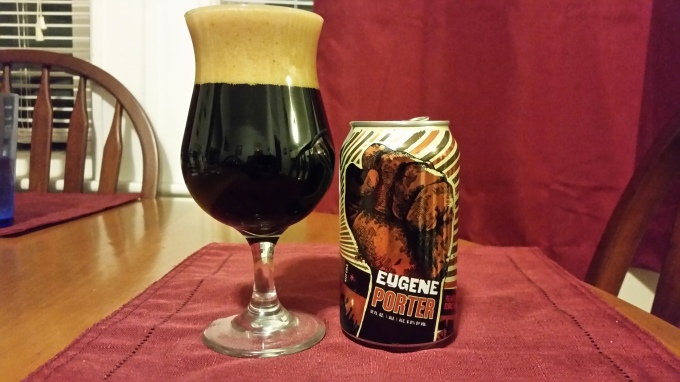 Revolution Brewing Eugene pours midnight black with a huge khaki-colored head. The scent is mild, some roasted malts. The beer is very malt forward, notes of dark chocolate, toffee, bread and black licorice along with a little lingering sweetness. There are minimal hops, just a hint at the end. The beer is medium bodied and pretty easy to drink, at 6.8% ABV it’s solidly boozy without creeping into the “imperial” category. The finish is clean with a little sugar and roasted malt on the tongue. Eugene is a solid porter and a good intro to a brewery that I have limited familiarity with. I will definitely try some of their other offerings, especially their well know hop-forward beers. Hoppy Boston score: 4.0/5.