I recently reviewed Castoff, a session IPA from Hidden Cove Brewery in Wells, ME. The beer was good, a solid addition to the stable of easy to drink, hop-forward beers that have recently become a staple of the beer market. As part of the article I did issue a general criticism of breweries entering new markets. It seems like every brewery enters new markets with an IPA variant, to the point that other styles are getting choked off of the shelves. This criticism was inspired by a quick perusal of the Hidden Cove website that revealed a number of interesting options, especially from their barrel program. Hidden Cove replied through social media and assured me that some of these barrel aged beers would be in Massachusetts soon, and sure enough I was able to find Derogation on a recent trip to the local bottle shop. Derogation is a sour golden ale that is barrel fermented with Brettanomyces and soured with lacto. The beer then undergoes a second fermentation after the addition of Alicante wine grapes, and is aged in Hungarian wine barrels for 10-12 months. Hidden Cove Derogation is available on a limited basis in 500 mL bottles. 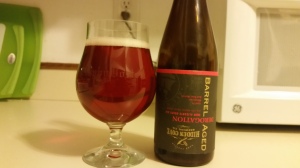 Hidden Cove Derogation pours ruby red with a large but quickly dissipating white head. The scent is fruity along with a little acidity. There is significant fruit flavor, notes of white grape, raspberry and sour cherry. The fruitiness is cut by a solid but not mouth-puckering sourness. The Brettanomyces also adds some funkiness and complexity. There isn’t much in the way of “traditional beer” malt and hop flavors, but that is clearly the intention. The beer is very light and easy to drink, with full carbonation and not too much booze at 6% ABV. Hidden Cove Derogation would be great as an afternoon porch beer, or as an alternative to champagne on a festive occasion. I am still developing a palate for some of these sour styles, but I enjoyed this and will seek out more of Hidden Cove’s barrel aged releases in the future. Hoppy Boston score: 4.25/5.