Last weekend I went to a get together at a friend’s house and naturally he asked that I bring some beer (I guess I’ve gained a reputation as a beer expert). Five of ten tears ago this group getting together would have meant a late night and many drinks, but now most of us have kids so it’s pizza and a beer or two on a Saturday afternoon. When I bring beers to a party I usually gravitate towards mix packs, the style diversity means there is usually something that everyone will enjoy. After a quick perusal of a local bottle shop I settled on the Otter Creek Mixed Bag variety pack, featuring Backset Berner IPA, Over Easy session IPA, Kind Ryed rye IPA, and Couch Surfer, their new oatmeal stout. I am a big fan of the new Otter Creek lineup, every beer I’ve tried has been good to great. Apparently I’m not the only one, due to the increased demand for their beers Otter Creek recently announced a major expansion of their Vermont brewery. The one beer from the old Otter Creek lineup that I missed was Stovepipe Porter, with the focus on hoppy beers the new selection really hadn’t found a good replacement for that beer until now. Otter Creek Couch Surfer is available year-round in 12 oz. bottles (mix packs and on it’s own) and on conventional and nitro draft. 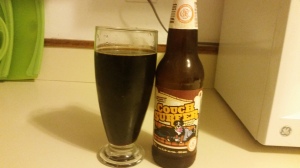 Otter Creek Couch Surfer pours a dark brown with a minimal tan head. The scent is mostly roasted malt, rich and dark. The malts also lead the flavor, notes of dark chocolate, caramel, fresh baked bread, weak coffee and roasted barley. There is also a little hit of hops, adding some balance and bite in the finish. Couch Surfer is a little more hoppy than you might expect from an oatmeal stout (no surprise considering the direction Otter Creek has taken recently), but still it’s still a very malt forward offering. The oats help give the beer a full body and rich mouthfeel, but it still drinks very easy at 5.4% ABV. The finish is clean with a little roasty aftertaste. I would love to see more breweries make oatmeal stouts, you can get a ton of flavor without the booze and bourbon that dominate most current stout offerings. Couch Surfer is a great example, malty, complex and delicious but you can have a couple without getting hammered. It is also great to see Otter Creek branch out from the hop bombs, I’ve loved their new line but like seeing a little more style diversity. I can’t wait to try this beer on nitro. Hoppy Boston score: 4.25/5.