I’ve mentioned in previous posts that Mystic Brewery and Cambridge Brewing Company have recently collaborated on opening a barrel cellar and bottling project. We can expect to see a number of new barrel aged and wild beers from each brewery over the course of the next few years, and many of these beers will be available in bottles. I’ve enjoyed many of CBC’s year-round offerings in bottles and cans, but some of their best offerings have been brewery-only due to capacity issues. It will be great to sample more of these beers on a regular basis. One of the first releases from the bottling project is Hay is for Horses, a Nordic pale ale brewed in collaboration with brewers Anders Kissmeyer from Denmark and Yvan de Baets from Belgium. I’ve recently noticed a number breweries making Nordic Pale ales, which use spices that were common in Nordic brewing tradition. Hay is for Horses is brewed with a wide range of ingredients including gruit herbs, oats, alfalfa hay, heather honey, and a little bit of hops. The beer is fermented with an English ale yeast that lets the herbal qualities shine through. It is available for a limited time on draft and in 22 oz. bottles. 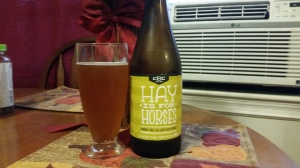 Cambridge Brewing Company Hay is for Horses pours a hazy light amber with a mild cream-colored head. The scent is pretty complex, a little yeast along with a diverse bouquet of herbs. The herbs lead the flavor, notes of cut grass, green tea, heather and spice. There is also a mild acidity to the beer, not a full blown sour but you get a little bite on the tongue. The malts add another level of flavor, touches of whole grain bread, honey and crackers along with a rich mouthfeel. The hops are muted, but the beer dries out at the finish leaving a herbal and spicy aftertaste. Despite the solid body and complex flavor profile the beer goes down smooth and isn’t too boozy at 5.25% ABV. This beer definitely isn’t for everyone, if you stick to hop bombs or the beers traditionally brewed by American brewers this might be a little out there for you, but I really enjoyed it. If you are a fan of unique beers or you want to try something different I highly recommend Hay is for Horses. Hoppy Boston score: 4.5/5.