There is a lot of talk recently about mergers and acquisitions involving major players in the beer market. Some of the most popular independent brewers in the US have sold parts of their companies to large international conglomerates. While there are obvious pros and cons to these types of deals (which I will get into in a future post), there are also examples of smaller breweries buying labels or merging with other small breweries. A good example is The Shed brewery. The Shed was a Vermont staple for years, serving hard cider and beer to area residents. In 2011 Otter Creek acquired The Shed Brewery label when the former owners decided to close, and they continued producing their flagship Mountain Ale and IPA. Otter Creek is undergoing a bit of a renaissance, their new line of beers has been incredibly well received. It makes sense that this would lead to the development of new beers in some of their other lines, and one of the first is The Shed Profanity Ale. Profanity Ale (which is an awesome name by the way, with all of the name competition how was that one not taken?) is a hoppy version of a traditional brown ale. When done correctly hoppy amber/brown ales, can be a delicious mix of hop flavor and aroma with full malt body, great beers for cooler fall weather. Profanity Ale is the newest addition to the Shed’s year-round lineup, it is available on draft and in 12 oz. bottles. 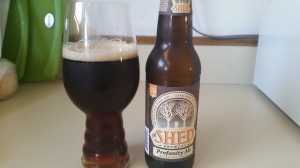 The Shed Profanity Ale pours a deep brown with a moderate cream colored head. The scent is mostly floral and piney hops, along with a touch of roasted barley. The beer is hop forward to start, notes of cut grass, lemon, resin and earth along with a solid bitter kick. This is complemented by a full malt body, hints of caramel, roasted nuts and fresh baked bread. The beer is medium bodied and goes down smooth, but packs a little punch at 6.8% ABV. The finish is crisp with a little lingering mixture of bitter hops and sweet malt on the tongue. The Shed Profanity Ale is a perfect beer to drink as the days start to cool down, plenty of hop flavor but more body than the IPAs that dominate the market. You can be f@#%ing sure I’ll be pounding a few more pints soon! Hoppy boston score: 4.25/5.