I believe that the best way for a small brewery to stand out in the increasingly competitive beer market is to focus on one type of beer at the outset, and perfect that particular style. Usually this means one category, for example; hop-forward beers, Belgian ales, lagers, session beers, etc. Bissell Brothers Brewing in Portland, ME took this concept to a new level. At first their entire production was based around a single beer. Fortunately for them this one beer was a hop-bomb IPA called The Substance, and it quickly became one of the most sought after and highly regarded beers in Maine (and beyond). I visited Bissell Brothers during my trip to Portland last year, and I was able to sample The Substance in their tasting room. Unfortunately they were sold out of cans so I couldn’t do a formal review of the beer. This summer the brewery has done a much better job of keeping customers updated on the availability of their beers using their social media accounts. When I saw that they would have plenty of The Substance in stock on the weekend I would be in Maine I knew that their brewery on Industrial Way in Portland would be a must-stop. The Substance is brewed weekly with Falconer’s Flight, Centennial, Apollo, Summit and Chinook hops and distributed on draft and in 16 oz. tallboy cans. 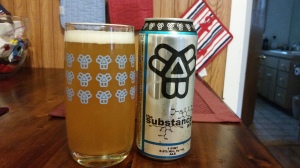 Bissell Brothers The Substance pours a hazy straw yellow with a mild white head. The scent is a huge burst of hoppy goodness, mostly citrus fruit and pine. The taste is also very hop forward, notes of lemon, resin, grapefruit, mango and grass along with a bitterness that bites you back a little. This hoppiness is balanced by some solid malt flavor, bready with a hint of caramel. The beer is medium bodied and despite the bitterness drinks very easy. At 6.6% ABV it is moderately alcoholic for the style. The finish is crisp and clean with some lingering hop flavor. Some beers get so hyped up that they inevitably disappoint, but that is not the case here. Nearly every brewery makes an IPA, and The Substance is one of the best. There are so many great beers available on Industrial Way, but the trip is worth it for this beer alone. Hoppy Boston score: 5.0/5.