While I am a proud beer geek, I am also a serious science nerd. My job as a chemist pays the bills but it is also something that I am passionate about. Brewing beer involves a ton of science, from chemistry to physics to microbiology, so these interests often intersect. When Sierra Nevada announced their new Hop Hunter IPA I was immediately intrigued by the provided description. Sierra Nevada had noticed the rise in popularity of “wet hopped” beer, which are beers brewed with hops that had just been harvested. Most beers are brewed with dried hops, but the drying process can result in a loss of some of the volatile compounds that add flavor and aroma. Hops are only harvested in the fall, so most brewers have a limited window to fully capture the flavor of fresh hop cones. Sierra Nevada seems to have found a solution, they steam distill the wet hops before they even leave the fields, isolating a hop oil that contains all of the key volatile compounds. This oil is then added to the brew kettle along with the regular hops. The result is Hop Hunter IPA, a beer with the flavor of freshly harvested hops. Hop Hunter IPA is available year-round on draft and in 12 oz. bottles. 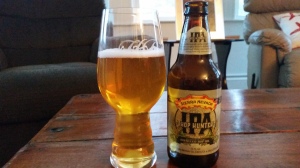 Sierra Nevada Hop Hunter IPA pours a clear orange-tinted yellow with a mild white head. The scent is a huge burst of floral and resinous hops, there is so much hop aroma that the beer almost smells bitter. The hops also lead the flavor, notes of pine, lemon and cut grass, along with solid but not overwhelming bitterness. The hop flavor has the freshness that you predominantly see in wet-hopped beers. There is some light malt in the backbone, but it is clearly a canvas to showcase the fresh hop flavors. The beer goes down very easy and isn’t overly boozy at 6.2% ABV. Isolating the fresh hop essences to make wet hopped style beers all year is extremely cool, and this beer is a very tasty result. Hoppy Boston score: 4.5/5.