Rogue Brewing Company was founded in 1988 as a 60 seat brewpub in Ashland, Oregon. From there they have grown into one of the most widespread and well known craft breweries in the US. Rogue is a unique operation, their website (HERE) is full of statements, rules and missions outlining their “revolution”. The basis of this revolution is their line of hand crafted ales, lagers and spirits (Rogue had its own distillery as well as their brewery). While Rogue had gained notoriety for some of their off-the-wall creations like the Voodoo Doughnut Bacon Maple Ale, their most well known beer is probably Dead Guy Ale. Rogue Dead Guy Ale is a Maibock, a German style lager that tends to be lighter in color and hoppier than a traditional bock. Originally brewed to celebrate the Mayan Day of the Dead in 1990, Dead Guy Ale quickly grew into one of Rogue’s most popular and widely distributed beers. The art on the label also attracted the interest of Grateful Dead fans (due to a coincidental resemblance to some of the bands artwork), who adopted it as their beer of choice. Rogue Dead Guy Ale is available year round on draft as well as in 12 and 22 oz. bottles. 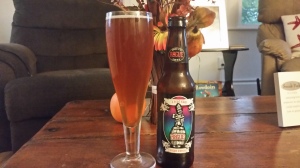 Rogue Dead Guy Ale pours a clear deep amber with a minimal off-white head. The smell is pretty mild, some sweet malt and a touch of earthy hops. The malts lead off the flavor, whole grain bread, caramel and a touch of sweetness. The hops are present, notes of forest floor, grass with a little bitter bite that provides a suitable counterpoint to the malty flavor. The beer is medium bodied with a slightly sweet finish. The beer is smooth and easy to drink, clearly a lager. This is a solid version of a German Maibock, a style that is underrepresented in American craft beer. Worth a try, and I would like to see more brewers take a crack at the Maibock style. Hoppy Boston score: 4.0/5.