One of my favorite things to do when I travel is to try local beers (shocking, I know). If I go out to dinner or for drinks I’ll usually seek out beers that are from the area and not available in Boston. Usually this beer tourism is limited to trips out of state, but there are some Massachusetts beers that haven’t made it into the city yet. I was recently down on Cape Cod for a wedding, and I was finally able to try some beer from Cape Cod Brewing Company. I had hoped to make a visit to the brewery itself but couldn’t due to some time constraints. Fortunately I was able to swing by a local liquor store and grab a bottle of their latest release, Kurt’s Farmhouse Saison. Cape Cod brewed this beer as part of a celebration honoring Kurt Vonnegut, the world famous author who spent time on Cape Cod. They chose a Belgian style saison because Vonnegut was captured in Belgium during the Battle of the Bulge, and this experience inspired his best known book: Slaughterhouse Five. Cape Cod Kurt’s Farmhouse Saison is available for a limited time on draft and in 22 oz. bottles. 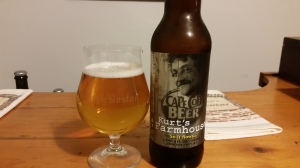 Cape Cod Kurt’s Farmhouse Saison pours a clear cornflake-yellow with a mild white head. The Belgian yeast dominates the flavor, fruity esters with a little spice. The yeast also leads off the flavor, notes of white pepper, coriander, apricot, pear and white grape. This is complemented by substantial light malts, cereal grains from the barley and a big hit of spicy wheat. The wheat flavors make this beer teeter on the style boundary between saison and witbier, but it tends to be a blurry line. There is also some crisp hoppiness in this beer, earth, lemon and grass. The beer is light bodied and easy to drink, and not too heavy and 5.5% ABV. Overall this is a very solid saison. I’ll have to pick up some more Cape Cod beers the next time I’m in that area, and hopefully they’ll expand distribution up to Boston soon! Hoppy Boston score: 4.0/5.