You could easily argue that modern American craft beer started with Anchor Brewing Company. The original brewery that became Anchor was founded in San Fransisco in 1871. It underwent multiple iterations including a fire, shut down for Prohibition, and numerous changes in ownership. The history is pretty interesting, you can see it all on their website HERE. Anchor’s flagship beer is Anchor Steam, a California Common, the first style of beer developed in the US. Anchor now brews a wide variety of year round and seasonal beers, which are distributed around the country. Anchor’s Summer seasonal is an American wheat beer that they have been brewing since 1984. Anchor Summer Beer is brewed with pale barley and malted wheat along with Goldings and Glacier hops. It is available during the summer in 12 oz. beers and on draft. 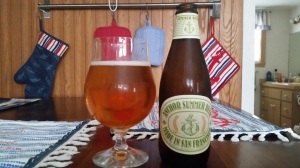 Anchor Summer Beer pours a clear deep yellow with a moderate white head. The smell is mostly wheat with a little pale barley malt and a touch of lemon. The flavor is very light, with the malts at the forefront, wheat bread and a little sugary barley. The hops are nearly undetectable, a touch of lemon and very little bitterness. The beer is light and drinkable at 4.5% ABV, and finishes clean. If you like summer wheat beers (think Sam Adams Summer) you might want to give this a try. Personally, not my favorite style. If I wanted to drink a lighter style beer from Anchor I’d prefer their California Lager. Hoppy Boston score: 3.5/5.