The story behind Westfield River Brewing Company is reminiscent to the way many other small breweries begin – a group of friends hanging out, enjoying great beer, and making grand plans that didn’t include their current jobs. Founded in 2012 in Westfield, MA these friends set out to make a variety of drinkable, but still flavorful beers. A much better plan than working a 9-5 job that you have no passion for! Westfiled River is currently in the process of moving their operation to Southwick, MA. The new brewery and tasting room should be open to the public this Fall. In the meantime you can sample their selections on draft and in 12 oz. cans distributed throughout the state. Westfield River Brewing Company’s flagship beer is Charlie in the Rye IPA, named after the brewers’ favorite dog. Charlie in the Rye is brewed with caramel malt, rye and honey providing sweet and spicy notes to balance the heaping additions of Falconer’s Flight hops. 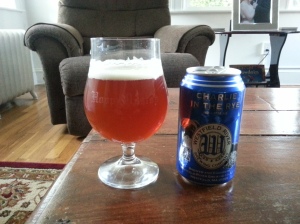 Westfield River Charlie in the Rye pours a deep amber, slightly cloudy with a mild cream-colored head. The smell starts with a big burst of juicy citrus hops, followed by some spicy undertones of rye. The malts come through stronger in the flavor, with spicy rye, grainy barley and just a hint of sweetness from the honey. There is also significant hop flavor, touches of lemon, grapefruit and pine. The beer is medium bodied, complex but drinkable, with a mild but noticeable hop bitterness. At 5.8% ABV it isn’t a session beer, but it is low enough in alcohol that it won’t put you under the table if you have a couple. The finish is clean with a little hoppy bite on the tongue. This is a very solid version of a rye IPA, nicely melding the diverse flavors together. I’ll definitely be trying more beers from Westfield River in the future. Hoppy Boston score: 4.25/5.