Americans love their hop-forward beers! Many people who make the transition from macro-lagers to craft beers quickly gravitate toward IPAs. It should be no surprise that this style has become the most produced variety of craft beer. The popularity of the IPA, and the increase in sales resulting from a beer being labeled an IPA, has led to an explosion of IPA spin-off beers. This includes Black IPA, White IPA, Belgian IPA, and the newly popular Session IPA. While American IPAs traditionally have 6-7% ABV (or higher), there was a demand for hop-forward beers with lower alcohol. Now there are a huge number of local and national offerings labeled “Session IPAs”. The proliferation of this new style led to an inevitable backlash from many craft beer enthusiasts. They call Session IPAs a marketing gimmick for mislabeled American Pale Ales, and in many cases this is true. One beer that seems to be above criticism is Left of the Dial, the Session IPA from Notch Brewing Company. Notch specializes in session beers. All of their offerings are 4.5% ABV or below. So instead of taking a 7% ABV IPA and reducing the malt in the recipe to lower the alcohol, Notch carefully crafted a balanced ale that showcases popular American hops. Notch is brewed with Fawcett Golden Promise along with a small amount of caramalt and oats. Restrained addition of popular hop varieties Simcoe, Citra, Palisades and Crystal add the distinct flavor associated with American IPAs without adding overwhelming bitterness. Left of the Dial is now a year-round offering, available in 12 oz cans and on draft (rumor has it that you can occasionally find it on cask as well, looking forward to trying that). 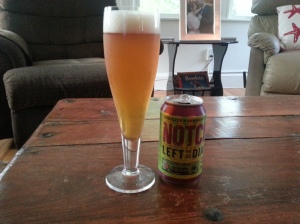 Notch Left of the Dial IPA pours an orange tinted yellow, slightly cloudy with a solid white head. The hops are present in the smell without being overwhelming, scents of pine and citrus fruit. The taste is also hop forward without being overdone, notes of lemon, orange and resin. Unlike many “session IPAs”, there is noticeable malt providing balance to the beer and contributing touches of biscuit and light grain. The beer is very easy to drink, there is a little bitterness but not as strong as many hop-forward beers. At 4.3% ABV this is a session beer by most definitions, perfect for day drinking. As the invitations to summer BBQs and lake houses start to pour in, Notch Left of the Dial is going to quickly become one of my go-to summer beers. Full flavored, hop forward but well balanced, and very easy to drink. Hoppy Boston score: 4.5/5.