The craft beer market can be a little trendy. A particular beer or beer style can gain popularity and lead to a host of imitations and clones. The shelves of any good beer store are currently saturated with hop-bomb double IPAs, barrel-aged Imperial Stouts and sour beers. A few brewers coined the “session IPA” term and now there are scores of them. It is refreshing when a brewery decides to go against the grain and do their own thing. Pretty Things Beer and Ale Project has always been one of the most unique breweries in New England, making an electic selection of beers that often defy traditional style (or recall styles that have fallen out of favor). While ultra hoppy IPAs are all the rage, Pretty Things has been developing a double mash technique that produces big malt flavor in their high gravity beers. This double mash technique was previously used to brew a barleywine called Our Finest Regards and an imperial stout called Barbapapa. The most recent double mash beer is Grampus, a hoppy golden ale with 10.5% ABV. The closest classification is an American Strong Ale, which seems to be a catch-all definition for high gravity beers that don’t fit into other style guidelines. Grampus is brewed with pale barley along with some oats, rye and wheat. All of the malt is balanced by Fuggles, El Dorado and Bravo Hops. Grampus is available in 22 oz bottles. 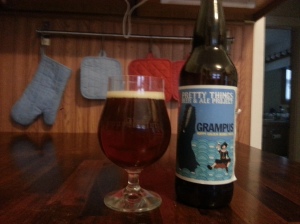 Pretty Things Grampus pours a deep and clear orange/red with a very mild off-white head. The color is a little surprising, beer brewed entirely with pale malts is usually pale gold, so this demonstrates the uniqueness of the mashing technique. The smell starts with rich maltiness, sweet and bready. This is intermingled with scents of woodsy hops along with noticeable alcohol. The malts come through strong in the flavor as well, caramel, toffee, sweet rolls, and biscuits. The alcohol is present in the taste too, warming and rich. The hops are noticeable but mild, contributing notes of pine and earth. The hops add a nice complexity, but this is very much a malt forward beer. It drinks almost like a lighter colored barleywine, with a thick, syrupy mouthfeel. Like the previous double mash beers, Pretty Things Grumpus is a celebration of malt. It is a good beer to slowly sip on a cool Spring evening. Hoppy Boston score: 4.0/5.