Until recently the thought of canned beer brought back memories of cheap, mass produced lagers. There has been a push over the last few years by many craft beer companies to start canning beer. Cans have a few advantages over bottles – they are easier to transport, allow less harmful UV light into the beer, and are typically made with recycled aluminum for the environmentally conscious. Even Sam Adams, who steadfastly refused to can their beer for years, has developed their own line of cans. Baxter Brewing in Lewiston, ME is the first craft brewery in New England to can all of their beer. Their year-round and seasonal beers are distributed in Maine and Massachusetts. Baxter Brewing’s winter seasonal is Phantom Punch Stout, a foreign extra stout brewed with organic cocoa nibs and vanilla beans. Phantom Punch Stout is named after the famous/infamous heavyweight title fight between Muhammad Ali and Sonny Liston in Lewiston in 1965. Ali knocked Liston out in the first round, but many didn’t even see the punch connect (thus the phantom punch), and rumors quickly followed of a possible fix. Regardless of what actually happened, it is fitting for a brewery from Lewiston to name a beer after the most well-known sporting event in the city’s history. 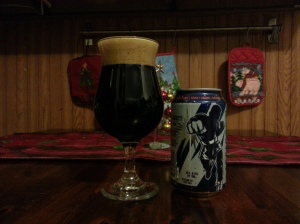 Baxter Brewing Phantom Punch Stout pours nearly black with a large and sustained tan head. The smell is dark malt forward, notes of chocolate, licorice and roasted barley. The malts dominate the taste too, chocolate, molasses and roasted barley are the most prevalent flavors. The vanilla comes through a little, along with a touch of smoke and some dark fruit flavors like cherry and raisin. There are some hops in the background, enough to balance the sweetness in the beer and give it some earthy undertones, but the dark malts are the foremost flavor. The finish is clean with just a hint of malt sweetness. This is a nice winter sipper, not overdone at 6.8% ABV. Overall a very solid beer, should pair well with hearty winter stews, braises and roasts. Hoppy Boston score: 4.25/5.