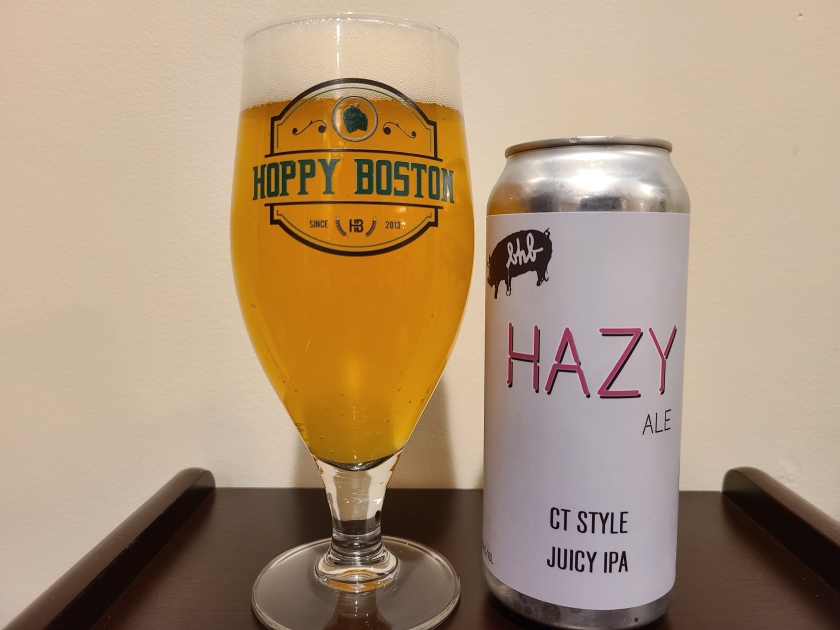 IPAs with low bitterness, loads of tropical and citrus flavors and aromas, and a hazy/murky appearance have taken craft beer by storm over the past few years. Breweries all over the world have adopted the sub-style, but there is still some debate on the proper name for these beers. Many breweries use descriptive titles like “Hazy IPA” or even “Juicy IPA”, which certainly give the customer a good idea of what type of beer they are buying. The most common moniker is probably New England style IPA, or NEIPA for short, since the sub-style was developed and then popularized in this region of the country. Some breweries are even more specific, naming their beers Vermont style IPAs (to the surprise of nobody, most of the breweries that do this are located in Vermont). Black Hog Brewing’s Hazy Ale is the first hazy/juicy/New England IPA that I’ve seen labeled as a “Connecticut style juicy IPA”. I am not sure what distinguishes “Connecticut style” from all of the other names for the sub-style, but I am guessing that the only difference is that this beer was brewed in Connecticut. Regardless, Black Hog Hazy Ale is brewed with Citra hops and is available on a rotating basis on draft and in 16 oz cans.

Black Hog Hazy Ale pours hazy light orange with a solid white head. There is a nice burst of tropical fruit aroma from the hops. These fruity hops also lead the flavor, notes of mango, papaya, and tangerine along with minimal bitterness. Some pale malts add balance along with hints of crackers and bread dough. Hazy Ale is medium bodied and drinks very easy, not overly boozy at 6.2% ABV. The finish is crisp with some lingering hop flavor. This is an excellent NEIPA, or CTIPA if you prefer (I don’t, but to each their own). I need to check out more Black Hog beers in the near future. Hoppy Boston score: 4.5/5.