My final beer thoughts/links column for the year is going to be kind of brief, this month was exceptionally crazy between work and then the holidays, so I didn’t to a stellar job keeping track of all of the comings and goings in the local beer world, but here are a few things that stood out to me. 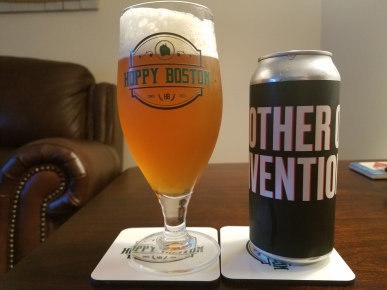 This isn’t confirmed, and I don’t have a link to share, but it appears that the Backlash Brewing taproom in Roxbury has closed. I’ve heard from multiple people who stopped by the taproom over the past couple of weeks and found it closed. The brewery hasn’t posted anything on social media since December 11th. I will pass along updates when I learn more.

Beervana has an excellent review of the decade in beer. It is crazy how much the industry has changed, and how many trends have come and gone, over the last decade. My predictions for the next few years: 1. Lots of new openings but slower growth because it will be balanced by lots of existing breweries shutting down. 2. More problems for the majority of bigger/national craft breweries as they get stuck between local breweries and “crafty” brands from big beer. 3. A resurgence of Belgian beer styles, they will never be as popular as IPAs or stouts but I think more hop-heads will start to “discover” these beer styles. 4. More of the successful suburban MA breweries will open up secondary taprooms in metro Boston, focusing on taproom/direct sales in the city and production in the ‘burbs.

One brewery that has seen excellent growth this year is Allagash, they surpassed the 100,000 barrel mark for the first time in 2019. I don’t know if another brewery does a better job in balancing support for classic beers with innovation, and uses calculated growth to their advantage. It also helps that their new year-round release River Trip is awesome. I hope other breweries that are looking to move from local to regional are studying the Allagash model.

Cat Wolinski argues that to sustain growth craft brewers need to diversify people, not products. I completely agree, I think we’ll start to see very successful breweries emerge because they are able to sell their product to a new group of customers instead of chasing the same subset of craft beer geeks that every other brewery is going after.

Brewery/taproom openings: Kismet Brewing is preparing to open in Westfield. After closing their taproom in March due to issues with the facility, 3cross Brewing in Worcester is back open. Lamplighter Brewing is planning a new brewery, taproom and distillery in East Cambridge, which will open in 2020. Dorchester Brewing is opening its new addition on New Years Eve, including a year-round rooftop beerhall and resident BBQ restaurant.

The owner of Pawtucket, RI’s Foolproof Brewing is putting the brewery up for sale, citing the challenges with growing the business in out-of-state markets in the current competitive environment. It will be interesting to see if more established breweries go up for sale, and to see if there are interested buyers.

Let Us Drink Beer surveyed a number of beer enthusiasts to see if they had any beer-related holiday traditions (you might recognize one of the contributors). The holidays might be over, but there are still some quality recommendations contained within!

The Allagash blog has an explanation of why it is important to rinse a beer glass before pouring beer into it. I have been trying to do this consistently at home, at the very least it makes for more Instagram-worthy beer pictures.

Clickbait article of the month: Hop Culture picks its top breweries of 2019. Even if a person could try enough beer to properly evaluate all ~8000 breweries in the country, what possible criteria would you use to single out 10-12 as the “top”? Each of these articles (this is far from the only guilty party) is just a mish-mash of hyped-up new breweries with a couple established favorites thrown in for good measure.

That is it for the last beer thoughts column of the year, stay tuned for another big year in local beer in 2020!