I was originally going to include my thoughts about all of the recent Trillium news in this column, but it became way too long so I wrote a separate post with my thoughts on the Trillium debacle.

Local beer writing legend Norman Miller has decided to retire his Real Beer Nut column and stop writing about beer as part an attempt to cut way back on drinking and improve his health. I am sure this was a tough decision but bravo to Norm for prioritizing his health. I think beer writers tend to gloss over the negative impact that drinking has on far too many people, it is obviously more fun to write about tasty new beers and debate the goings on in the industry. I hope stories like Norm’s will help others who are struggling with negative effects related to their beer consumption, and will cause more people to get help and work towards living happier and healthier lives. I wish Norm the best in his journey, and hope that he continues writing and participating in witty banter with everyone on twitter, even if it has nothing to do with beer.

With all of the negative news in the beer world it is nice to see something that is overwhelmingly positive, like Sierra Nevada’s Resilience IPA. Essentially Sierra Nevada has developed a new IPA recipe and all of the proceeds from the sales go to help the Camp Fire Relief Fund. The coolest thing is that Sierra Nevada asked other breweries to make the beer and also donate the sales to the cause, and over 1000 breweries got on board. Here is the complete list sorted by state. We’ve seen some examples this week of breweries not living up to the lofty ideals set by the craft beer community, but this collaboration is the best example I’ve seen of the awesome things that craft beer can do, and a testament to the respect that Sierra Nevada has across the industry. I’m looking forward to trying as many of the versions of Resilience IPA as I can get my hands on.

Jonathan Surratt (@beerinator on Twitter) has launched ReadBeer.com, an aggregator site that compiles beer writing from around the internet. I suggest bookmarking it and checking regularly, there is a ton of good stuff on the feed. Hoppy Boston hasn’t been added to his feeds yet, hopefully sometime in the future!

The Mass Brew Brothers hosted another blind tasting, this time of porters and stouts from breweries in the city of Boston. I wasn’t able to make it to this tasting due to travel around the holiday which is too bad, I love some tasty stouts and porters.

Boston.com asked a diverse crew of beer lovers which local NEIPAs every Bostonian needs to try. I love how varied the answers to this questions were, it really highlights how much great beer is being brewed in the region.

I realize that Thanksgiving is over, but “best beers for Thanksgiving” lists can also be “best beers to drink with your Thanksgiving leftovers”. Norm Miller has a list of his favorites in one of his final beer columns, while Carla Jean Lauter’s is heavy on Maine beers. 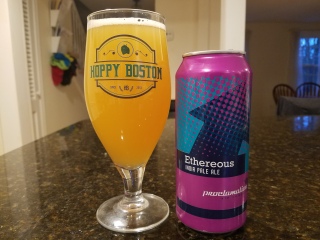 Local beer enthusiast and blogger Bearded and Brewed has outlined an itinerary for taproom tours in Rhode Island and in Southeastern Massachusetts. Both are designed for Thanksgiving weekend, but could be applied to any time you have a few days to really check out some great regional beer.

New brewery alerts: Backlash Brewing has finally opened their long awaited Roxbury taproom. Local mainstay Lord Hobo Brewing has substantially expanded their Woburn taproom, including an expanded draft list and food. Contract brand Off The Cuff has launched with draft accounts in central Massachusetts. Two Weeks Notice and Rustic Brewing have both opened in the Springfield area. Maine Today has a look at 3 new breweries opening in Bath, Brunswick and Berwick. Maine stalwart Baxter Brewing finally has a full service brewpub in Lewiston.

The Mass Brew Brothers also have a run down of all of the breweries in Massachusetts that have recently opened or are set to open soon (and there are a lot of them)!

A few popular breweries also have new locations in the works. For those commuters stuck waiting for a train or sports fans pre-gaming a Bruins or Celtics game, Jack’s Abby is opening a bar in North Station. Everyone missing the great array of beer gardens that popped up this summer should check out the new Turtle Swamp Winter Beer Hall in Roslindale.

The first “Best of 2018” beer lists are starting to surface including one from Em Sauter, author of the exemplary Pints and Panels cartoon beer reviews.

Josh Noel comments on the first widespread distribution of an Allagash Coolship beer, and on how little buzz it gets compared to juicy NEIPAs and pastry stouts. These coolship beers are delicious but the style takes some getting used to, I think it will remain a small but highly respected niche in the brewing world.

Maine Icons has the story behind the founding of Austin Street Brewery as part of a profile of co-founder Will Fisher.

The Craft Beer Cellar blog looks at the revitalization of the Smuttynose brand under new ownership.

That is all for November, it has been a crazy month and I’m looking forward to more fun as we head into the holidays!