Many new breweries open their doors and release a large variety of beers in their first year. Some of these beers become brewery staples, some get tinkered with and reworked, and some disappear after a short run. I understand the desire for variety, different drinkers prefer different beer styles and breweries with tasting rooms need to offer some choices. I also know that even many amateur beer brewers like to work on a bunch of different styles at once, most professional brewers probably feel like they are more limited by time and equipment than by ideas or production ready recipes. The downside is that most recipes need to be tweaked as you move to larger scales and new equipment, and this can result in quality and consistency issues especially when you are scaling up a stable of beers. This is probably why a few breweries are going against the grain, starting by perfecting a single recipe and brewing that beer exclusively for a significant period of time. A good local example of this strategy is Building 8 Brewery in Florence, MA. Building 8 launched with a single beer, an IPA simply named The IPA. The beer quickly generated some buzz, and brought crowds to the brewery seeking cans of the well crafted hop-bomb. Building 8 is now venturing into other beer styles, and tallboy cans of The IPA are now popping up in area bottle shops. 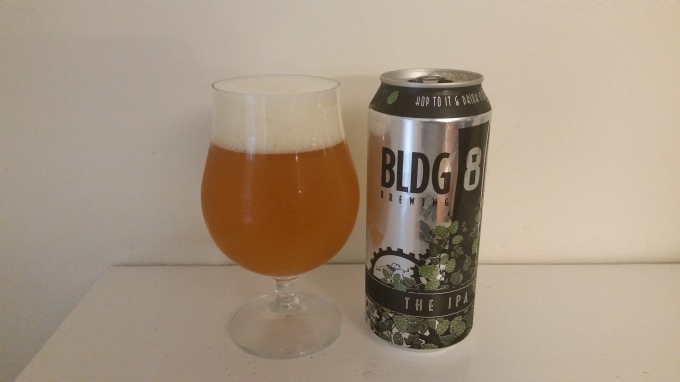 Building 8 The IPA pours a clear orange-yellow with a massive white head. The scent is a solid dose of hops, mostly citrus and tropical fruit on the nose. The taste is also very hop forward, notes of grapefruit, orange, pine and passion fruit. This is accompanied by a firm bitter bite, The IPA is clearly inspired by West Coast style IPAs more than the juicy/low bitterness IPAs that have become the rage in the Northeast. The hops are balanced by some malt, touches of toasted bread, crackers and a little honey. The IPA is medium bodied and goes down smooth, at 6.5% ABV it is about average for the style. The finish is crisp and dry with some lingering hop flavor and bite. If you are going to start your brewery with a single beer you had better make sure it’s a quality product, and Building 8 The IPA is really good. Definitely worth picking up if you see it around, or taking the trip out to the brewery! Hoppy Boston score: 4.5/5.