I’ve seen some recent criticism out Boston as a beer city, specifically pertaining to the lack of focus on local beers. In fairness, most of this criticism was leveled at bars in the city who devote many tap lines to beers from across the country but few to beers brewed in their own backyard. I think it’s important to define what is local though. I personally consider any beer brewed in New England to be a “local” beer in Boston. I know this is a pretty liberal interpretation of local, but New England isn’t that big geographically, so there is good reason to include beers from Providence, Portland or even Burlington in the local category. This is a big reason why Hoppy Boston focused on beers of New England (and not just Massachusetts), and why I get excited when I see new beers from the other 5 states in our little corner of the country pop up in bottle shops. One brewery that recently started distributing to the Boston area is Deciduous Brewing Company out of Newmarket, NH. Deciduous brews an array of styles but seems to focus on unique takes on farmhouse, wild and sour beers. I recently grabbed a bottle of Sepal, a dry-hopped, sessionable grissette brewed with Brettanomyces and then spiked with bacteria at bottling to add a little tartness. Deciduous Sepal is available now in 500 mL bottles. 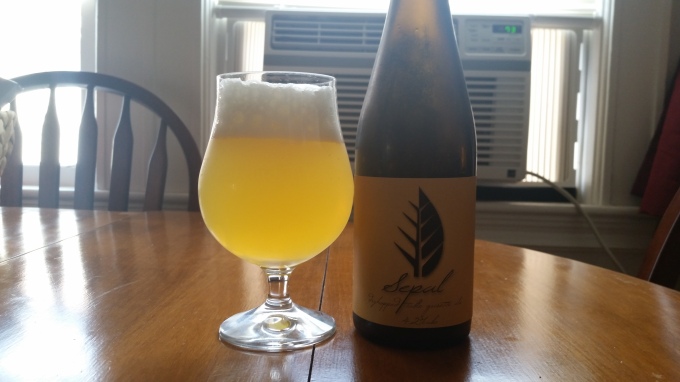 Deciduous Sepal pours a hazy bright yellow with a massive white head. The scent is a mixture of fruity hops and funky yeast. The yeast leads the flavor with notes of tart green apple, barnyard, herbs and peppercorns. This is followed by the hops, hints of mango, white grape and cut grass. The malts are mild but add some body along with touches of white bread and crackers. Sepal is light bodied and very easy to drink, a true session beer at 4.2% ABV. The finish is dry with some lingering complex flavors from the fermentation. I am a big fan of dry-hopped saisons, especially versions with complex yeast profiles, so this beer was right in a sweet spot for me. I look forward to trying more of Deciduous Brewing’s offerings now that they are available in MA! Hoppy Boston score: 4.25/5.