Some of the most interesting and popular styles of beer in the world were originally developed by monks living in monasteries in Western Europe. The most famous brewers amongst these monks were the Trappist order, and making beer soon became a major source of income for the abbeys. Brewers the world over now make Dubbels, Tripels and other abbey style ales, but only a select few gain the Trappist label. Anything labeled as a certified Trappist beer must be brewed/supervised by monks, brewing must be of secondary importance within the monastery, and the beers must not be brewed for profit, any income generated beyond the needs of the monastery must be donated to charity. There are currently ten Trappist breweries in the world, and now one is in the US. Spencer brewery was started at St. Joseph’s Abbey in Spencer, MA in 2013. They currently produce a single beer, Spencer Trappist Ale, a Belgian style blonde ale.  Spencer Trappist Ale is sold on draft and in 11.2 oz. bottles. 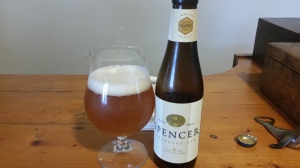 Spencer Trappist Ale pours a deep orange, slightly hazy with a moderate off-white head. The smell is all Belgian yeast, significant fruit with a little spice. The taste also starts with the yeast, notes of pepper, green apple, and coriander along with a little pear, pineapple and bubblegum. There is a solid malt backbone to complement the expressive yeast character, touches of toasted bread and crackers. While the yeast and malts are the predominant flavors you also get just a hint of hops that contribute to a crisp finish on the tongue. Spencer Trappist Ale is easy to drink, with a little bit of a spicy finish that keeps you coming back. At 6.5% ABV this is a full strength beer without going overboard. I am ready to call the first American Trappist beer a success, I am hoping they eventually branch out to other Abbey inspired styles. Hoppy Boston score: 4.25/5.