Discovering craft beer is a process. Each person takes a slightly different path from downing bland, mass-produced lagers in college to appreciating the wide variety of flavors that fall under the heading of “beer”. One of the breweries that helped expand my palate was Smuttynose, operating out of Portsmouth and North Hampton, NH since 1994. One of my good friends from college found Smuttynose while working near Portsmouth one summer, and brought back many of their staple beers, including Shoals Pale Ale, Old Brown Dog, and Robust Porter. Smuttynose Robust Porter was one of my first introductions to Porter, which is now one of my favorite styles, especially when the weather gets cold in New England. Porter is a traditional British style of dark, flavorful ale. Porter was originally popular amoung the British working class, and was named for the workers on British docks and warehouses. There isn’t a clear line between what constitutes a porter vs. a stout. Stouts were originally a version of porter with higher ABV (thus the name), but now you can find dark British style ales with a wide range of ABVs that go by each name. Some argue that the use of roasted barley is key to a stout, where porter tends to have more hop bitterness, but it seems to be at the discretion of the brewer to name the style (or to forgo falling into a category altogether and just make a great dark beer). Smuttynose brews their Robust Porter with a variety of dark malts including Crystal 120L, Chocolate malt, Special B and Carafa. They also bitter with Magnum hops, a high alpha acid hop that adds a strong bitterness, followed by flavoring with American hop staple Cascade. 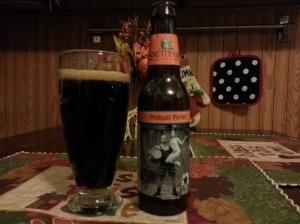 Smuttynose Robust Porter pours a very dark brown with a small but well sustained light brown head. The dark malts dominate the smell, strong scents of coffee with some roasted malt and brown sugar in the background. The dark malts also dominate the flavor with mocha, coffee and chocolate followed by some caramelized sugar and toffee. Despite all of the malt flavors the beer isn’t sweet, there is a solid dose of hops that give a pleasantly bitter flavor. The beer leaves a nice lacing on the glass as you drink. With a slightly thick mouthfeel this beer is great for sipping slowly. The finish is a mixture of tangy hops and black coffee. At 6.2% ABV Smuttynose Robust Porter is full bodied without being overwhelmingly high in alcohol. I love dark beers when the weather gets cold and after just returning from Maine I can attest to the fact that it’s getting cold! This will be a go-to beer for me throughout the winter months. Hoppy Boston score: 4.5/5.